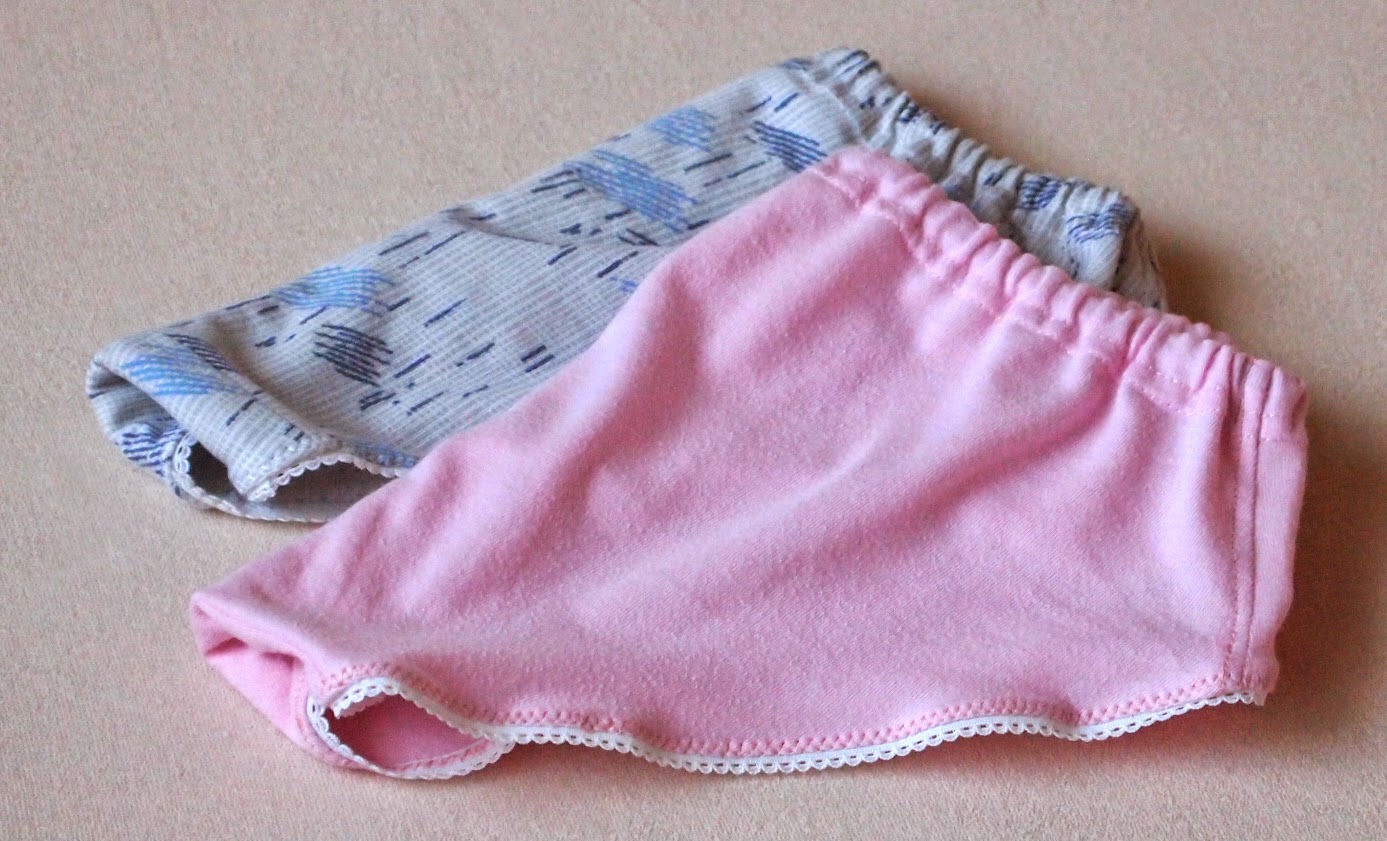 A while ago I had this idea to try sewing underwear and even bought some picot edge elastic, but my lack of experience with knits and the fact, that I don't have a serger stopped me. Until I came upon Indigochild's free bikini style T-shirt underwear  - an excellent beginner's choice, IMHO. I was so inspired after I read her instructions, that I couldn't wait to finish my work and get to sewing bikinis.
I should mention however, that I had trouble with printing the pattern and the lack of a control box made things even more complicated, but it might have been my computer and/or printer. I managed to get it right in the end and the pattern proved worth the effort - the xs size fits Gaby perfectly. 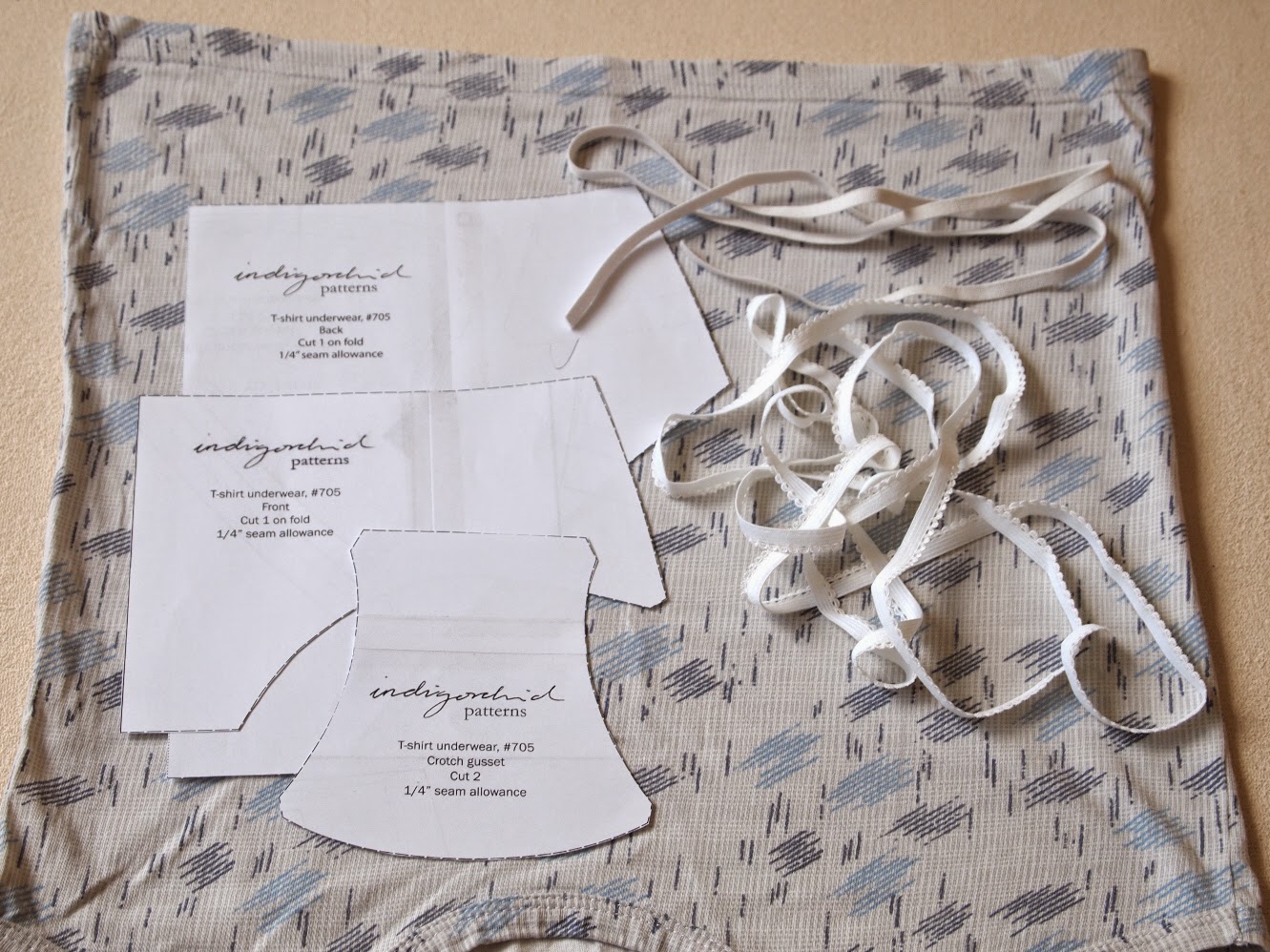 For my test bikini I used an old Alex's top and Indigochild's instructions for the simplest version, taking advantage of the hem of the top to put an elastic in it. 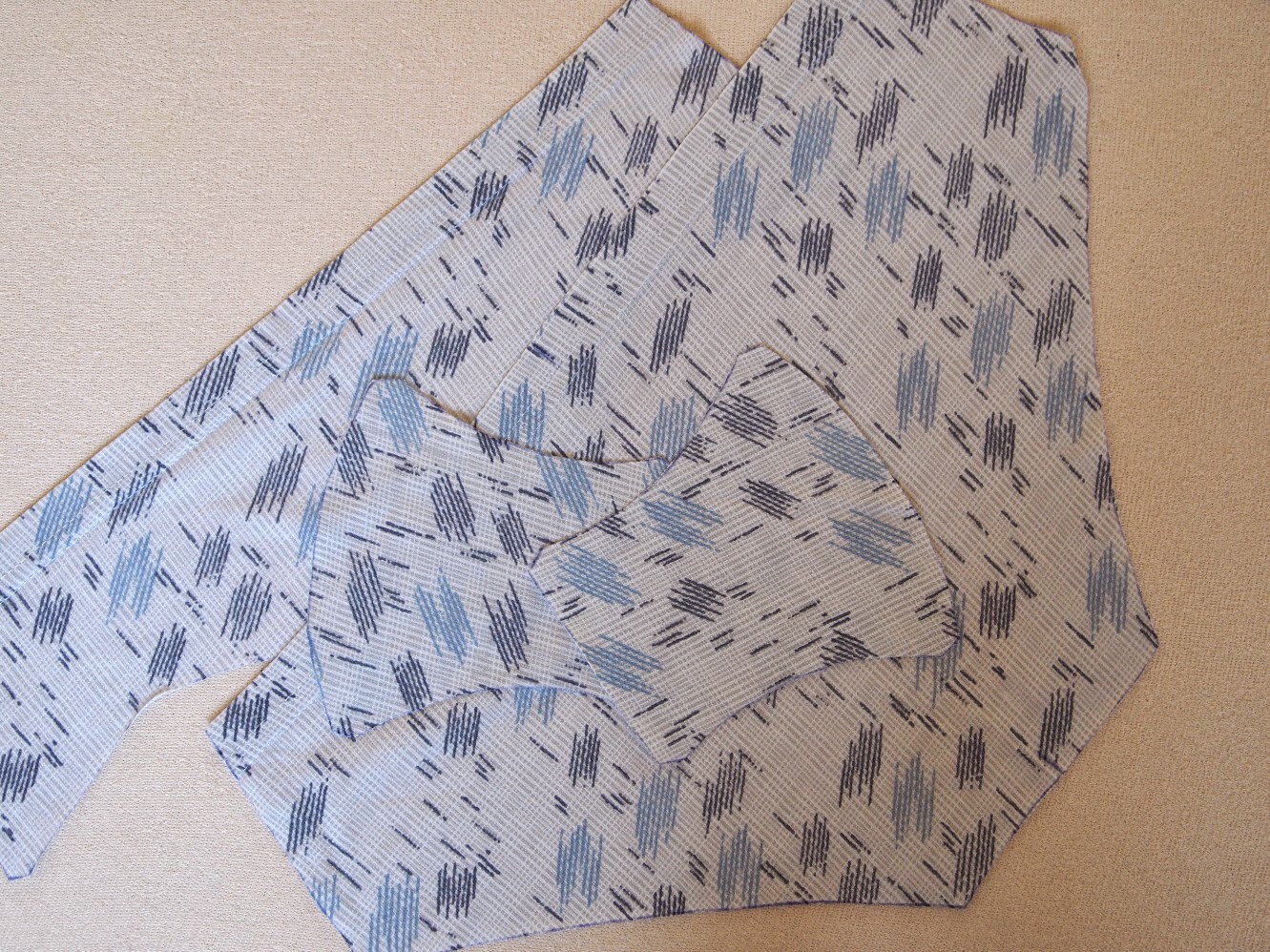 The bikini came out fitting perfectly, just a bit snug at the waist so I cut the elastic for the next pair a bit longer. The pink pair of undies was made out of an old Gaby's nighty, following the same instructions. 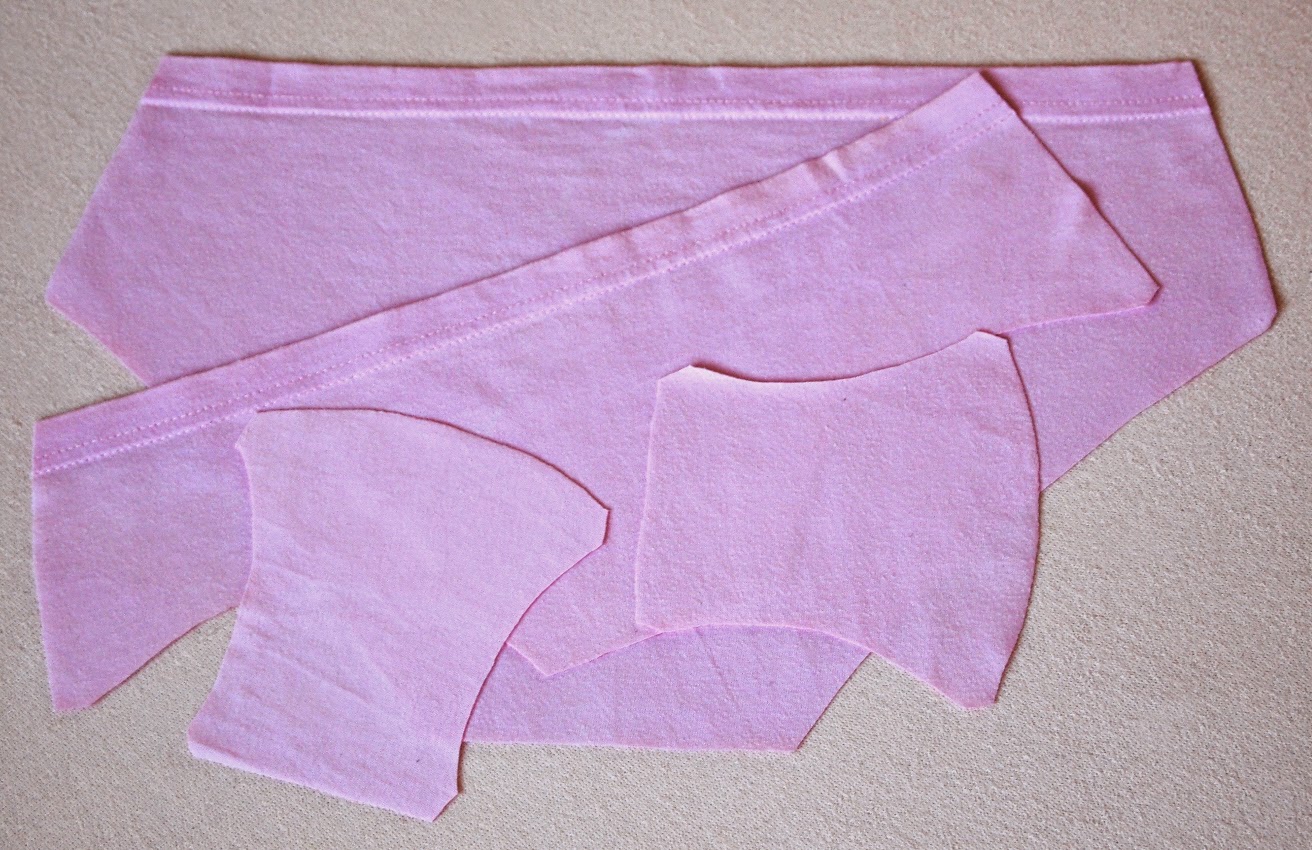 Now I want to try fold-over underwear elastic and some of the extras.

The second free bikini pattern I tried is So-Zo's. The pattern is made very professionally with a test box and printing and preparing it was super easy. However when it came to making the pattern everything went wrong. First - because the T-shirt I chose was long but narrow, I decided to try cutting the pieces not along but across the grain - mistake. I bought 3 mm underwear elastic and finished the leg openings with it, but I don't like it as the picot edge elastic, my stitching is very uneven and very amateur looking. The panties came too deep and too cut-out, sort of 80es style, but it might be just my wrong cutting, so I'll give the pattern a second chance. 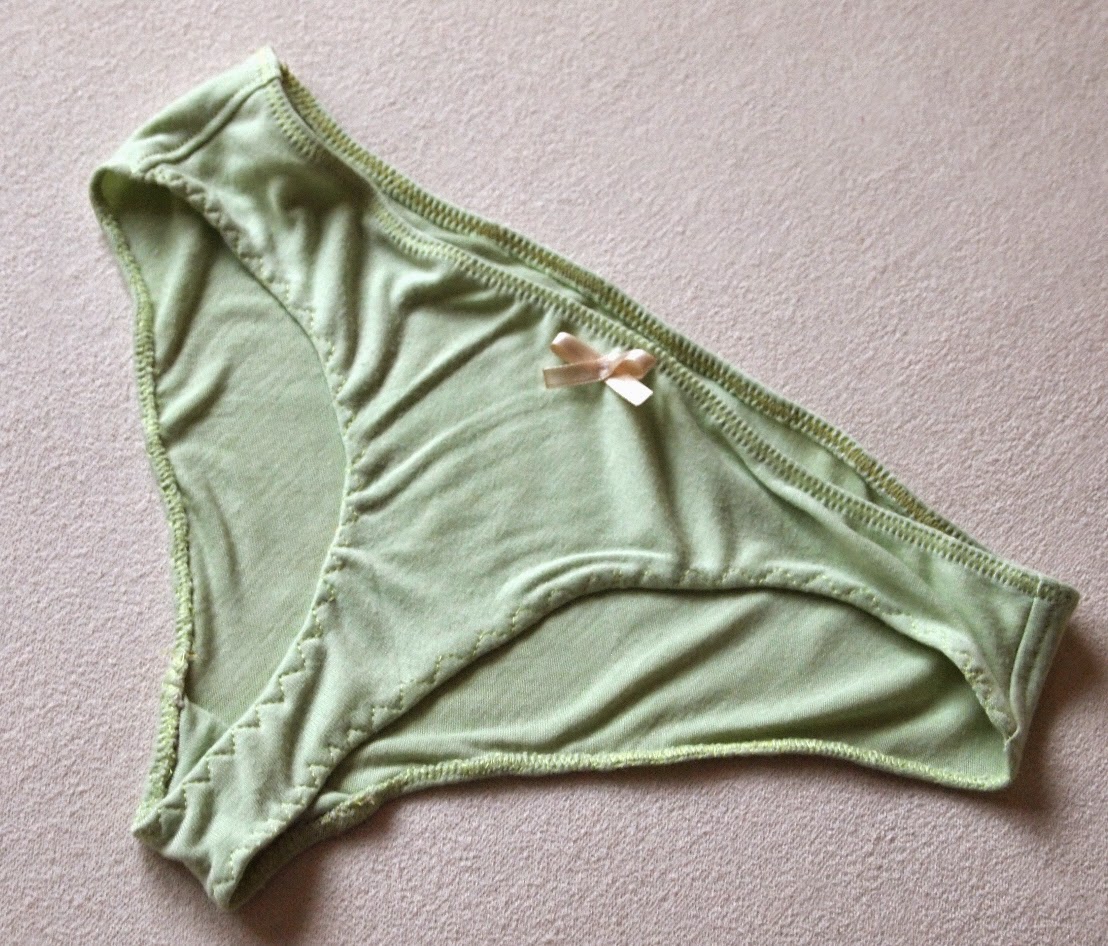 In conclusion - making undies is fun and not mission impossible without a serger.  But, as much as I love recycling, the cute and little worn T-shirts I have are from the children and to my surprise they turned too small for a pair of panties and the big old T-shirts of my husband are too worn out and in dull (male) colors. So, having established a pattern, that works well I'll buy some good quality underwear fabric and work with it. But there's going to be some more panty making here soon, that's for sure!
Posted by Carmela Biscuit at 12:31 PM