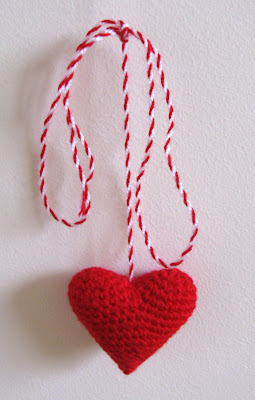 Today was a day for martenitsi. I spent several happy hours making these bracelets from a ready-made cord and some beads. These are for my son's classmates. I hoped he would join me in the process, but ... no such luck :) 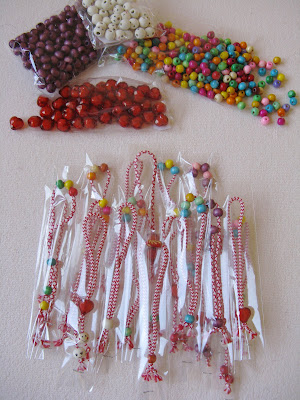 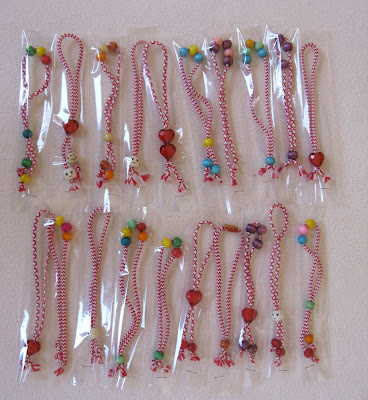 I also made some crocheted martenitsi and some River Bar Bracelets:
All the produce of our small workshop :)
Made by Gabie and me for the kids' classmates and friends: 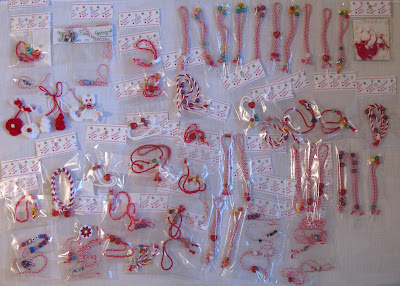 Posted by Carmela Biscuit at 8:29 PM No comments:

New Knits on the Blog

The first one is for my daughter - a long sleeved version of Berroco's RIA,
which I called PlumBerRIA. It's a super quick knit on US 4 (3.5 mm) needles
and YarnArt Merino De Luxe DK yarn. The yarn is very nice, extra twisted, soft,
BUT ... as it seems the case with Turkish yarns, the second skein is of lower quality - thinning threads, some wads, really annoying.
As the pattern requires beads, yesterday I went bead hunting and found THE PLACE - a M'ART shop, full of beads of all kinds and shapes and colors at super reasonable prices. Finally I chose two varieties of wooden beads - the plum ones were my natural choice, but I knew Gabie would prefer the berries - so it'll be the berries :) 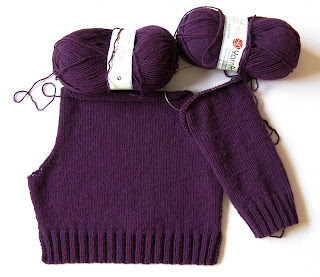 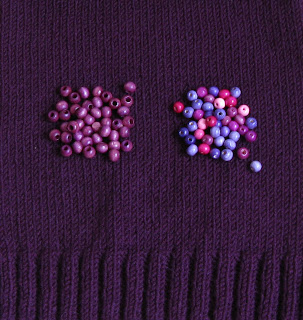 As a result of my hunting trip I returned home with a new package of yarn -
one of Nako Boutique yarns - Bambu, 65% cashmere 35% bamboo in a divine red color. I know the yarn I bought wouldn't suffice for this sweater, but the seller assured me that she can provide as much as I need of the same dye lot, so I trusted her and bought only one package (boutique yarns come on the too expensive side for my budget :) 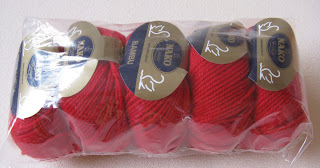 Posted by Carmela Biscuit at 10:39 AM No comments: 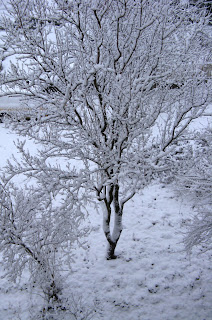 It's mid February and it's snowing out here in Sofia, but I'm in a summer mood.

This little sleeveless top took more knitting and nerves one could imagine, partly because of the small gauge (all was knit on a US 0 (2.00 mm) needle, but mostly because of the yarn. By all accounts, this is THE WORST yarn I've ever experienced. As I mentioned before, it is splitty, frays a lot and requires slow and careful handling of every stitch (and there were 200 of them in a row, and many, many rows). Then, because of these peculiarities of the yarn (and some whimsicality of mine :) I didn't want to break the yarn for the neck and armscyes shaping, so I used short rows and rib transitions. It may sound a bit complicated, and yes - it was for me:) I applied lots of mathematics, drew charts of short rows, etc.

The additional stitches for the neck band were added as knitted cast on (very neat!). I considered picot crochet for the edges, but it looked a bit old-fashioned, so I did crab single crochet instead (God, did that yarn make me crazy during crocheting!). The final touch - tiny, tiny beads along the neckline: 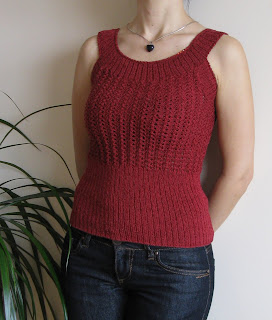 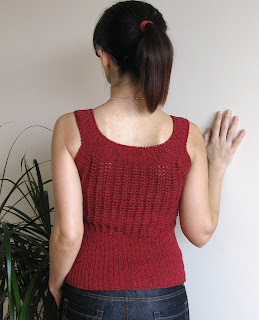 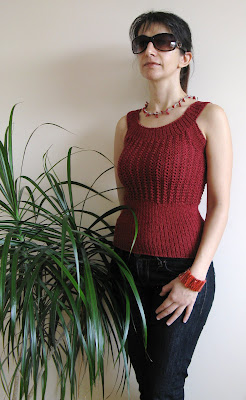 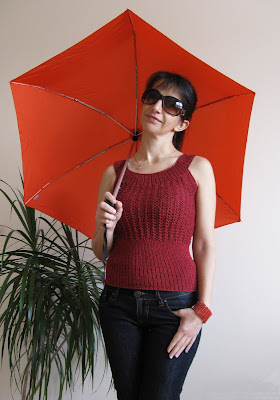 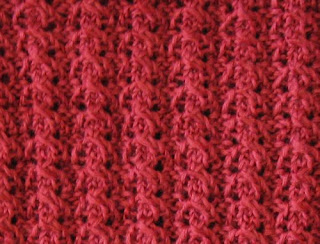 As my bordeaux top is moving ahead more slowly
than the carrier of a wanna-be Hollywood star,
today I'm taking a step back to retrospect my 2010 FO
(the lace is quite nice, though :)


I started the year cross-stitching and finishing a long time WIP - one of Sergent's Venice water-colors. I love this FO and I should frame it, it's a shame to keep it in a box. The other landscape - Bozentzi, is my own design and little pride, though now, that I know better, I would do it differently.

And then came knitting and crocheting - the new art I learned last year. Apart from those FO featured in the photo, I knitted a pile of hats, scarfs, wrist warmers and other small projects. I also learned a handful of quite useful new knitting techniques - the I-cord, the tubular cast on, the elastic cast off, etc.

All in all, quite a productive year: 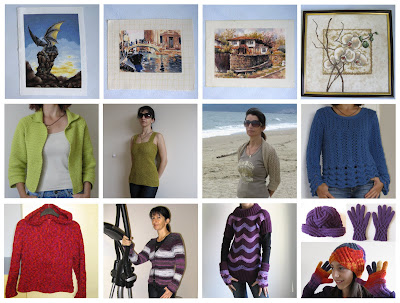 Posted by Carmela Biscuit at 9:21 AM No comments:

This spring-summer season I've set a goal to extend my yarn experience by testing at least 5 new summer yarns. The first of these is YarnArt Summer - a shiny blend of 70% cotton threads and 30% rayon. I swatched quite a few patterns with Summer before I chose this high ribbed top. The yarn is rather thin and most of my queued projects called for thicker cotton blends.
The color is Bordeaux - something new for my wardrobe. So far I'm pleased with the knitting result, not so much with the knitting process, which is a real slog on the 2 mm (US 0) needles. The monotonous 60 rows of 2x1 rib would have been a perfect TV knit, but the yarn is quite tricky, the rayon thread is constantly splitting and catching the needles. I'm knitting in the round with some negative ease, or at least I hope so, it's difficult to say so far, only 10 cm of the rib have been knitted.
Fingers crossed, it should get easier when I switch to the body lace. 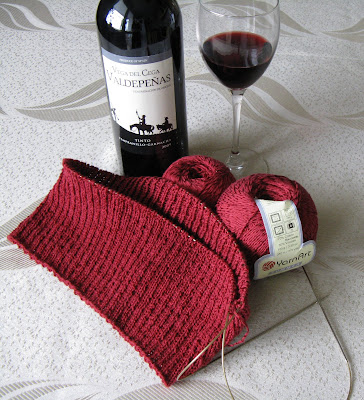 Posted by Carmela Biscuit at 3:03 PM No comments:

Be careful what you wish for

For a long time I've been wanting a very slouchy hat and I've been complaining that the supposedly slouchy hats I knitted where too small - even way too small - the 16-cable-hat turned as a beanie, actually.
So, when I embarked on this new project I took double precautions, even triple -
chose a designer, known for her bigger than expected hats, thicker yarn and
a needle one size bigger than the pattern called for.
Ha!
Half way through it became obvious that I was getting a large baking tin rather than a beret. I unraveled the 5 mm knit-work and started with the required 4 mm needle. And of course, I was knitting it in the round, I dislike sewing seams. The color - rose ashes - is an old love of mine (especially after I read "Thorn birds" at the age of fourteen), the design drawing is beautiful, and the hat is really big and v-e-r-y s-l-o-u-c-h-y.
So I hate it :) and I'll probably frog it.
CROAK CROAK 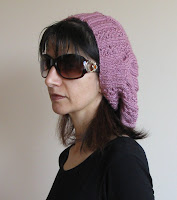 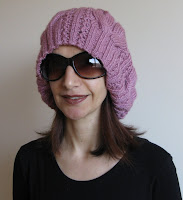 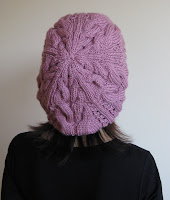 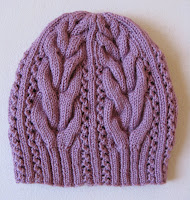 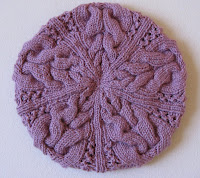 Posted by Carmela Biscuit at 4:31 PM No comments:

Today I took an inventory of my stash. Findings -

- What did I buy this for?
- Nice yarn, unfortunately insufficient :(
- All in all, poor yarn management skills
- I want more and better new yarn :) 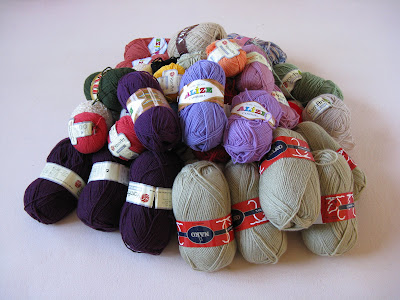 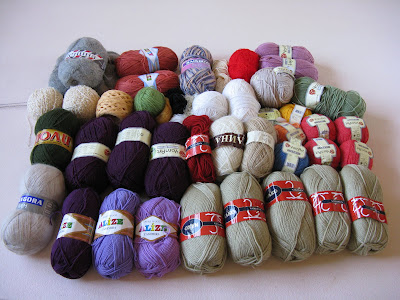 Posted by Carmela Biscuit at 6:40 PM No comments: 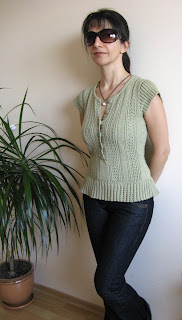 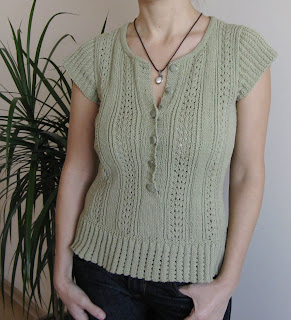 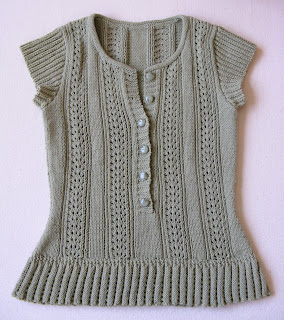 Posted by Carmela Biscuit at 1:31 PM No comments: 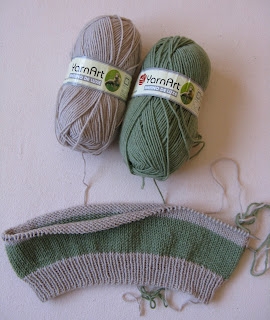 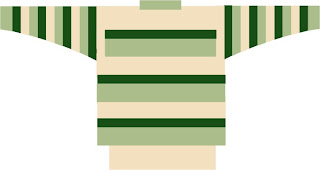 Finally, yesterday I started Moni's sweater - and ripped it out today.
Something was wrong with my tubular cast on - it was not elastic, should've
check it out on the youtube first.
Then it was too wide. Forget the patterns, claiming that 3 year old boys wear 40 cm wide sweaters - that's the size of my sweater, for heaven's sake!
I'm starting it again today with 16 stitches less, in the round.
But then, there's still the issue of the insufficient yarn. Theoretically, adding a
third color would definitely make the sweater nicer.
I've come up with two final designs (the first is Gabie's, the second mine), still wondering which would be THE ONE.
However, finding the right yarn after visiting three yarn stores today proved mission impossible.
The POLY polyester-wool blend, which I bought willy-nilly is coarse and no match to the fine Merino de lux.
Ah, the knitter's worries, they never end :)
But I found just the perfect buttons for my Arielle - modeled session tomorrow morning!

Posted by Carmela Biscuit at 6:04 PM No comments: 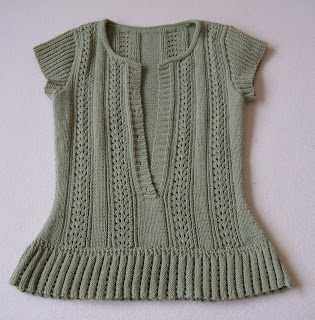 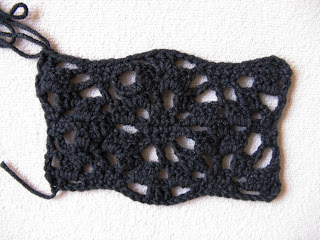 Arielle is ready,
yeeh, yeeh, yeeh ... :)
Finished it yesterday, but still looking for buttons, so no modeled pictures yet.
But I'm very pleased how it turned out.

Today, however, was one of those days, when nothing works.
I made three samples of a crochet top, liked none,
then decided to make a new, warmer hat for my daughter,
started three different patterns - none seemed right.