To Alinsky Monastery in November 2019

Yesterday we lucked again - after a few days of cold and rain it was fairly warm and sunny and we had a wonderful hike to Alinsky Monastery on Plana, together with Gaby. Interestingly, for the second time this autumn we took the wrong turn and ended hiking for extra 2.5 km. The reason is obviously our hubris - when we started making our own plans using OryxMaps, we checked with the GPS quite often and never got lost. And along most of the unpopular trails we hike there are rarely any insignias or marks, so a good knowledge of the trail and a GPS is crucial. However, as we got to repeat the trails we almost never check with the GPS. The result - more than a kilometer walk in the wrong direction and the only option - returning to the crossroad and taking the right turn the second time :) But we weren't unhappy with our mistake - the weather was fine, the track easy and the total of 16.5 km we hiked was quite within our optimal distance anyway.

: In the morning there was  a beautiful white fog covering the valleys between the mountains around Plana 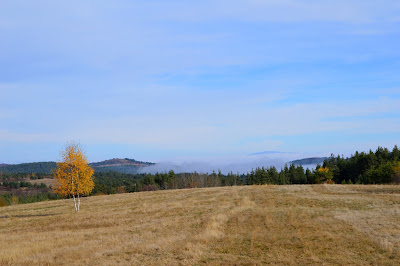 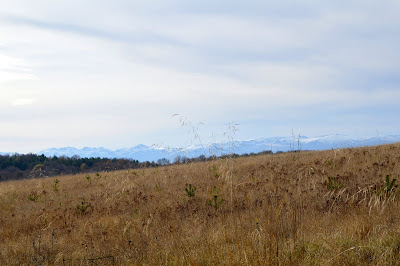 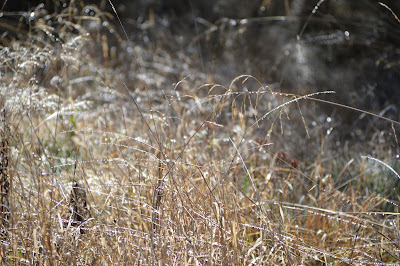 : The high peaks of Rila in the distance - the ridge of the Scary Lake (Strashnoto ezero), where we hiked last month 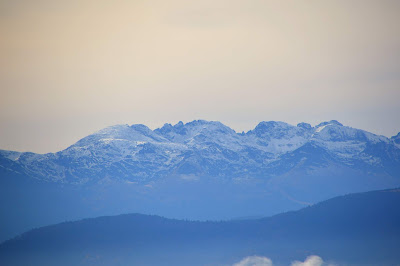 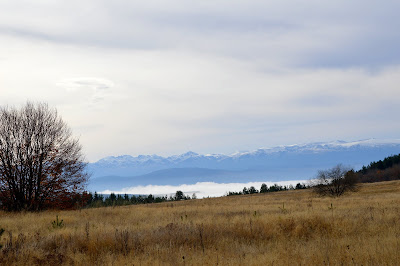 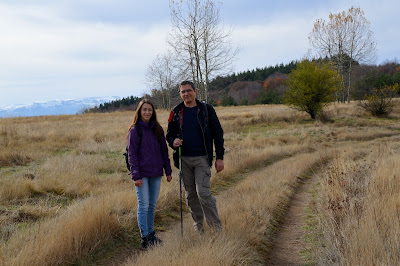 : The tracks on Plana are wide and quite level most of the time 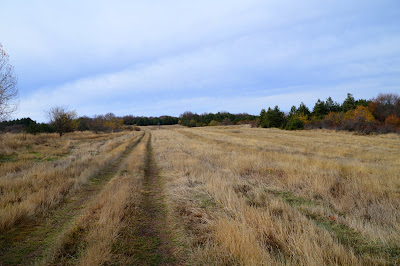 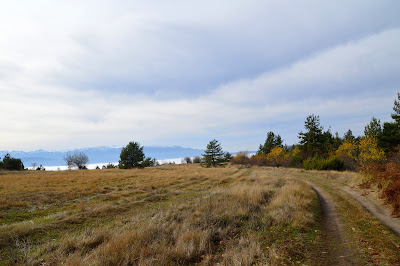 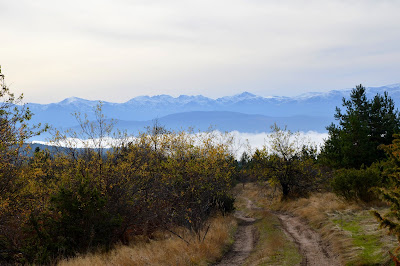 : Along the wrong track, which actually leads to the village of Alino. We might try it sometime, but the returning from the village to Sofia is somewhat problematic by public transport and there would be nobody to move the car to Alino while we hike between the two villages. 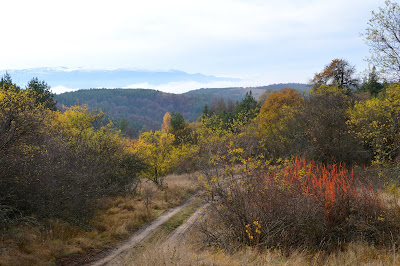 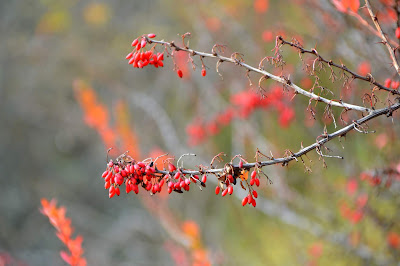 : A song thrush skipped on its two legs quite bravely in front of us for a while 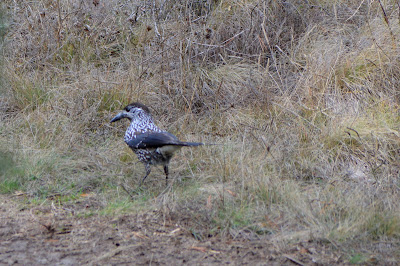 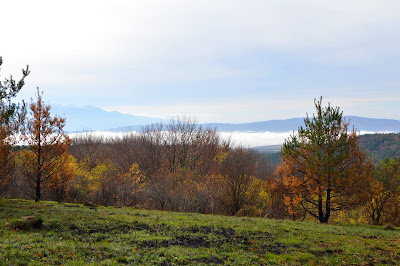 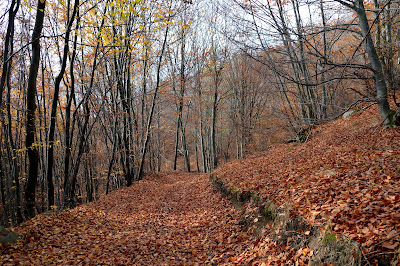 : The church of the monastery, the only building which has remained from the XIV century complex,  has been renovated quite beautifully. When we saw the construction brigade in the spring, I was very disappointed with the look of the area, but it seems I was wrong and they've managed to repair the church and the area around it without ruining it or turning it into an ugly kitsch. 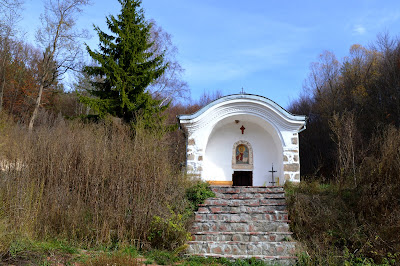 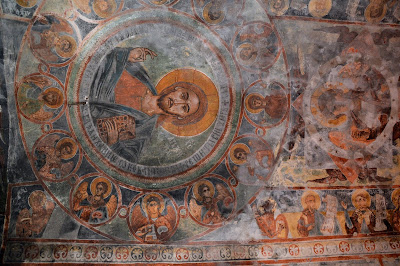 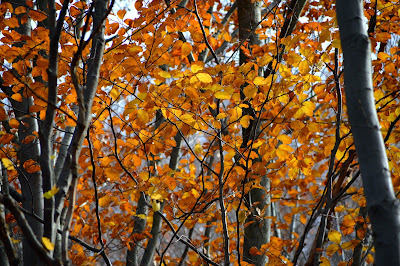 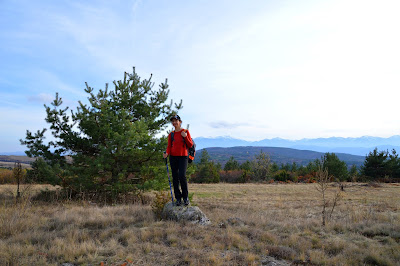 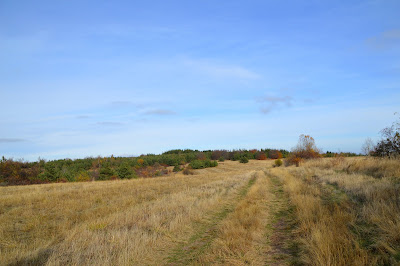 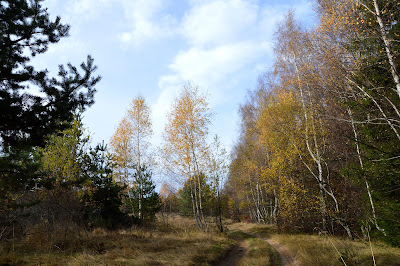 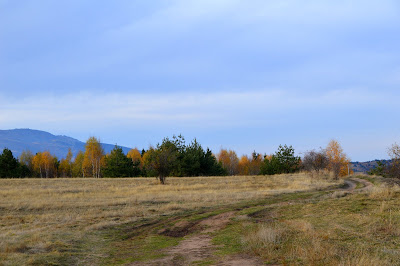 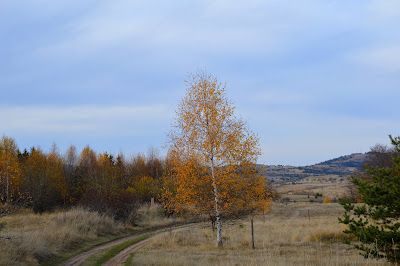 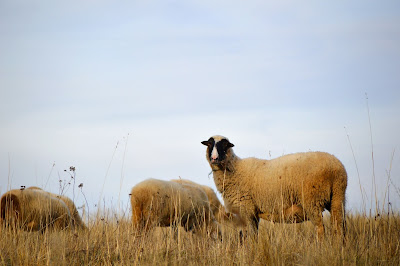 Posted by Carmela Biscuit at 7:26 PM