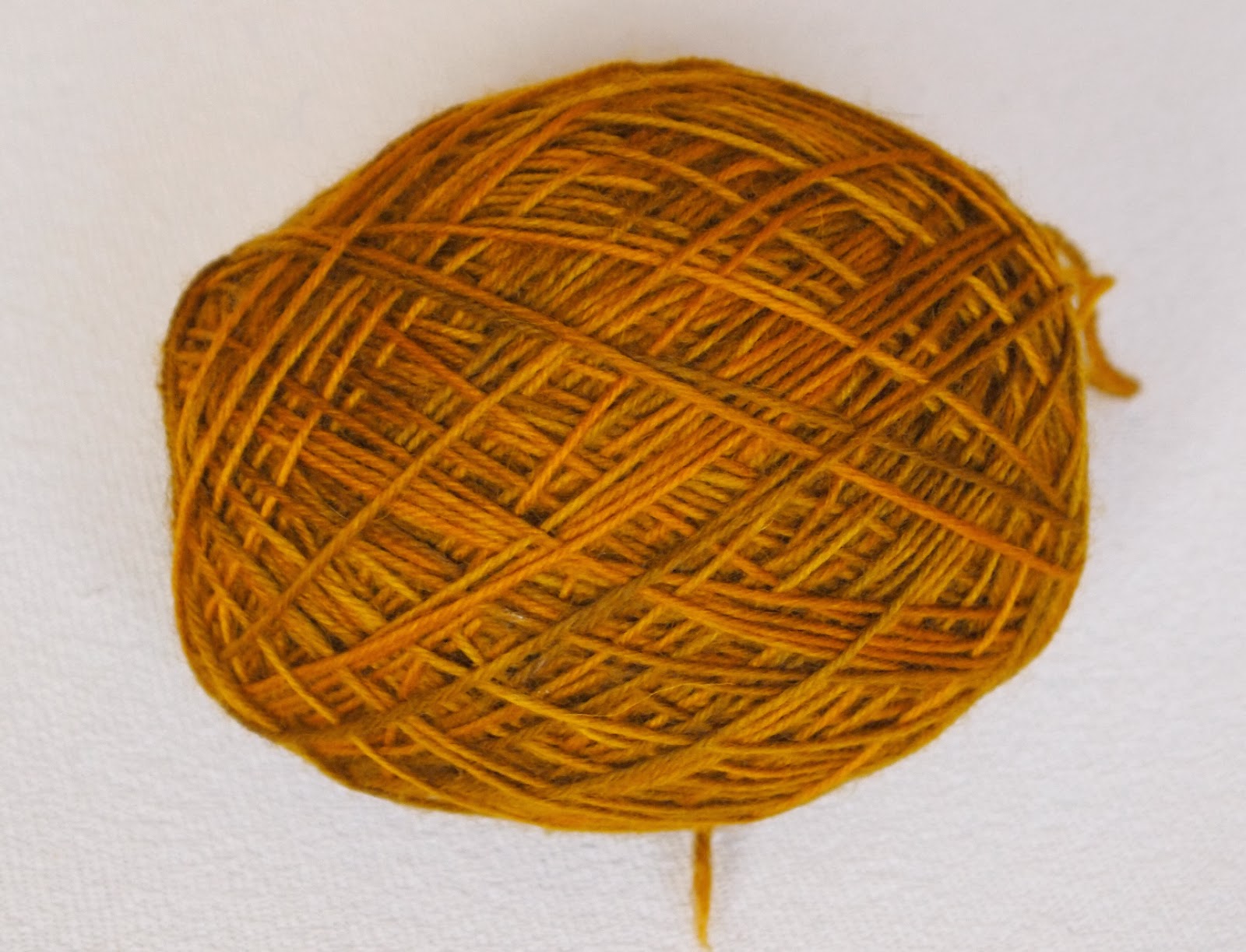 In my stash I had three balls of beige YarnArt Pure Merino, which I had bought specifically with the intention of dyeing them in yellow. At first I considered dyeing with turmeric, but after extensive reading and some experiments I can confirm, that the yellow color, gained with turmeric, vanishes when exposed to direct sunlight within a few days. So I bought a package of yellow and tobacco acid dyes for wool. And let the idea mature for a while.
Then, late on Wednesday night, having sewn the last of the buttons to Gaby's new black & white cardigan (photo session later next week), I found my hands idle and decided to unwind the yarn and prepare it for dyeing. I knew it was late, I was tired and embarking on a time-consuming and demanding task like dyeing a sweater worth of expensive yarn that late in the day would not be advisable. And then that's exactly what I did ☻! 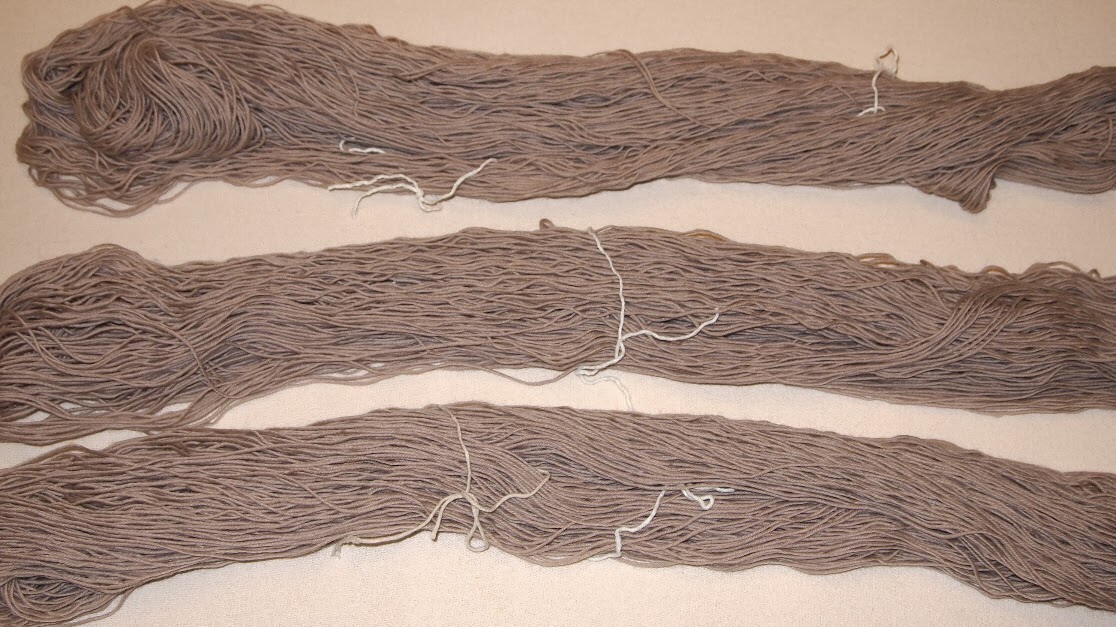 I prewashed the yarn and soaked it in vinegar solution (1:5 approx.). Meanwhile I boiled 2 l of water in an old pot I have allotted for dyeing experiments, adding appr. 50 g of vinegar and 40 g of salt to the water.
Then I prepared three plastic containers with diluted tobacco dye, yellow dye and a mix of tobacco and yellow. Using my kitchen scales, I poured exactly one-third of each dye into three smaller disposable plastic cups. 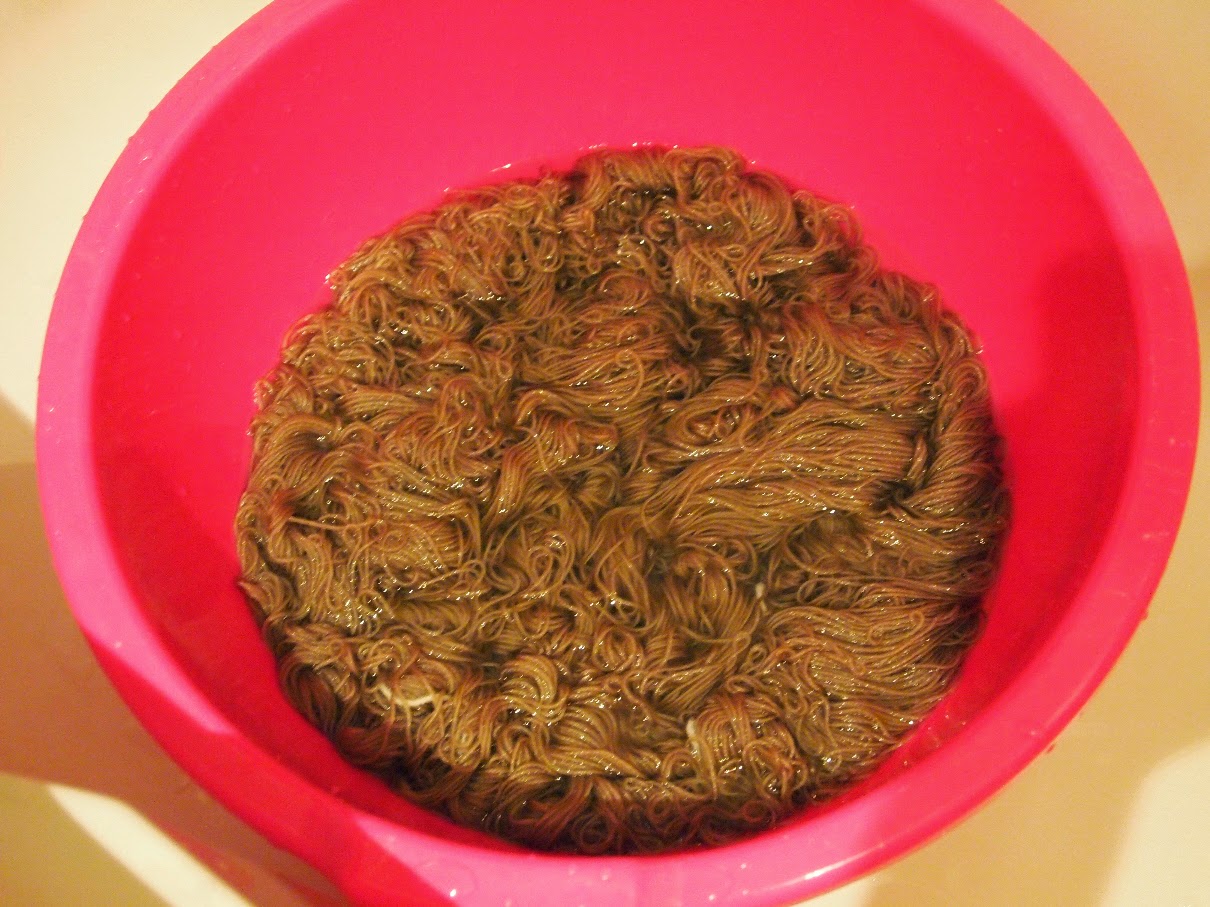 And then I proceeded to dyeing each of the skeins individually, trying to replicate the dye distribution as exactly as possible to gain equally dyed skeins. I spread the skein on a big tin, covered with foil and  distributed the three dyes. I did not make a proper sample of the dyes and the tobacco dye turned out to be too dark and I did not like the look of it, so I made a new concentrated solution of yellow dye and added one-third of it to the hot water. 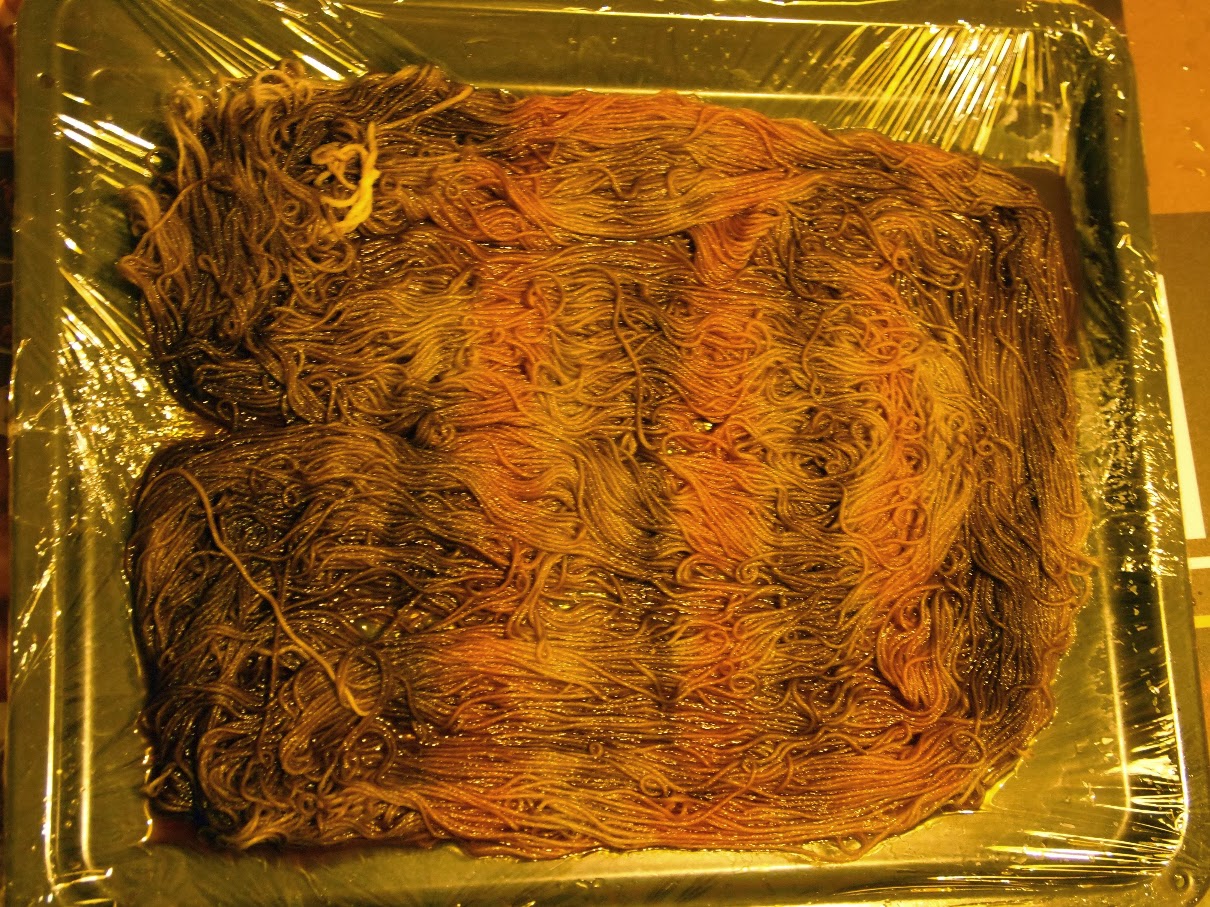 Then I placed the skein into the hot (but not boiling!) yellow water (containing vinegar, salt and yellow dye) and let it soak until the water was clear. 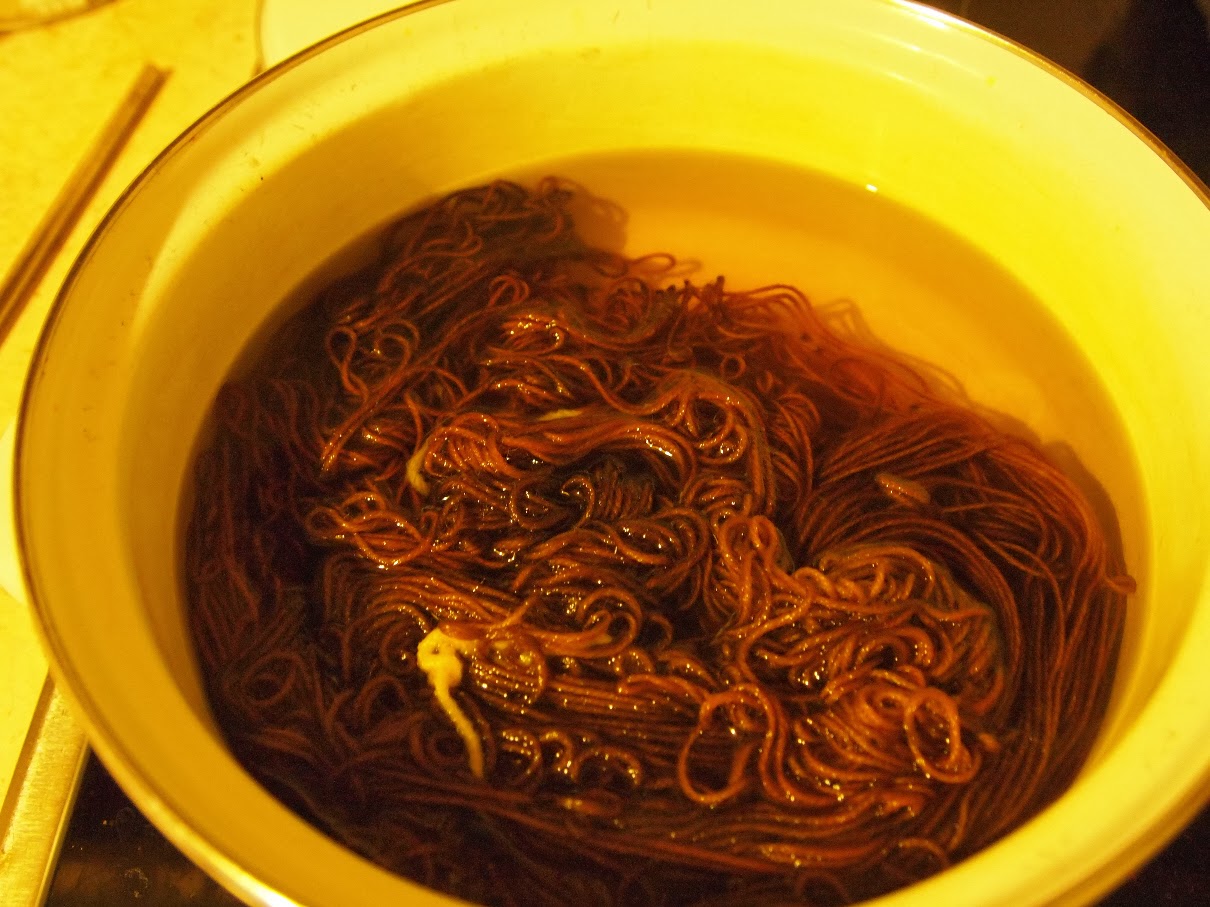 At all times I tried to keep the temperature of the water around 70C. When the water was clear, I transferred the skein together with the hot water into a plastic basin (to free my only dyeing pot) and repeated the whole process again and then once again. Of course, it was quite past midnight when I finished with the third skein and I was pretty tired and angry with myself for messing the tobacco dye (sad face).
I had to wait further for the yarn to cool, then I washed the skeins, soaked them in hair conditioner (another unsuccessful experiment, because it made the yarn bleed) and hung the skeins to dry in the bathroom. 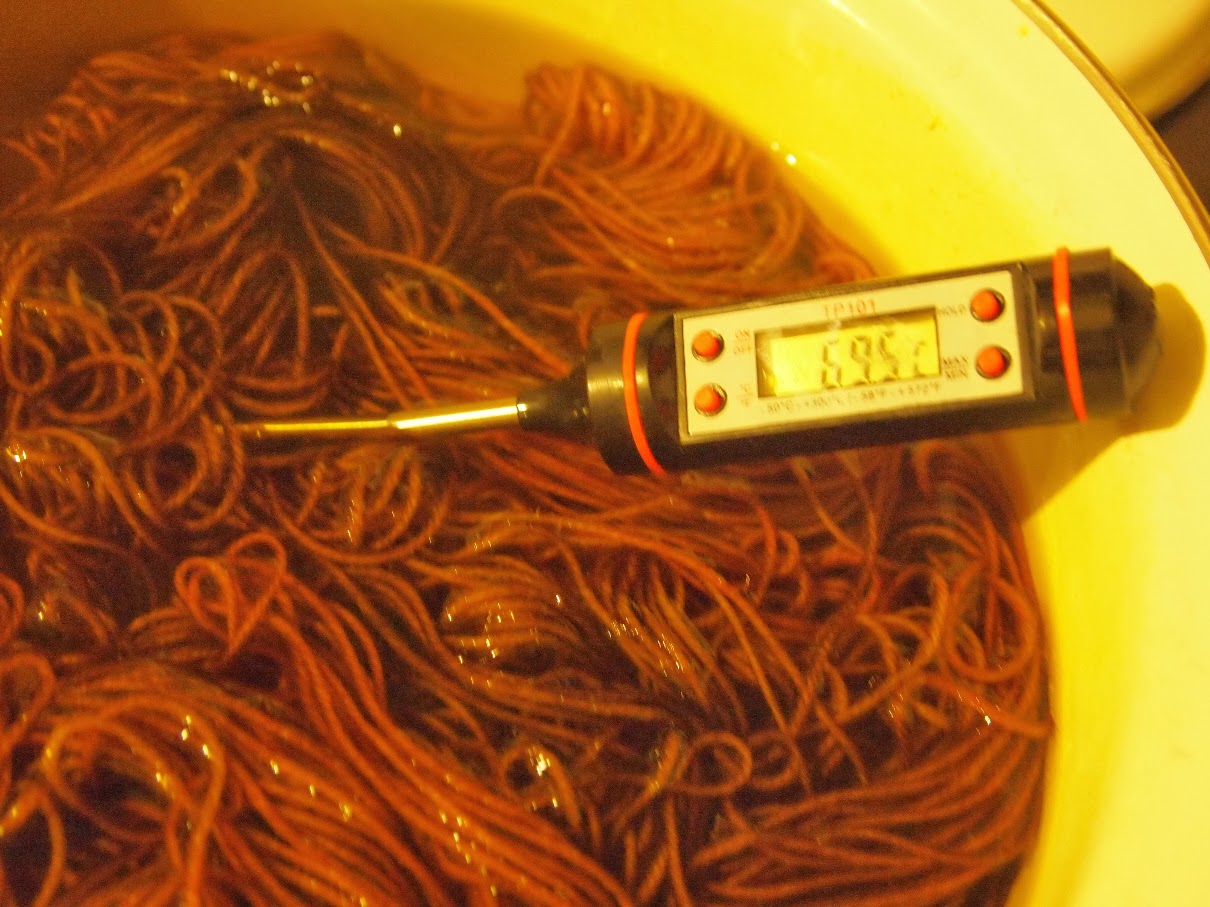 The next day I considered redyeing the yarn with a touch of red to give it a brick tint, but then abandoned the temptation and decided to knit it as it was. If the end result is not pleasing, I can always get some dark brown dye and cover my dyeing mistake. 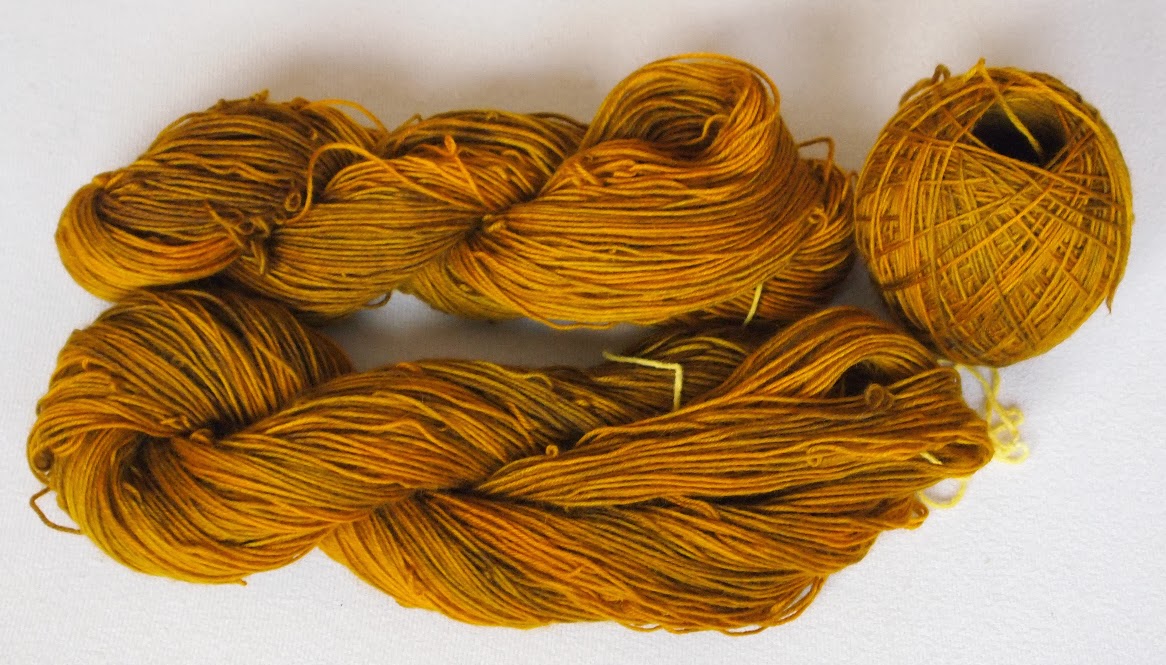 Today I started the back of a cardigan. I've read recommendations to alternate skeins to get even results, but I opted for knitting from one skein at a time. I inspected the skeins carefully and to me they look the same. I hope one skein (280 m) will suffice for the back, one for the two fronts and one for the two sleeves and thus, even if the skeins differ in color, it shouldn't be noticeable in the resulting object. 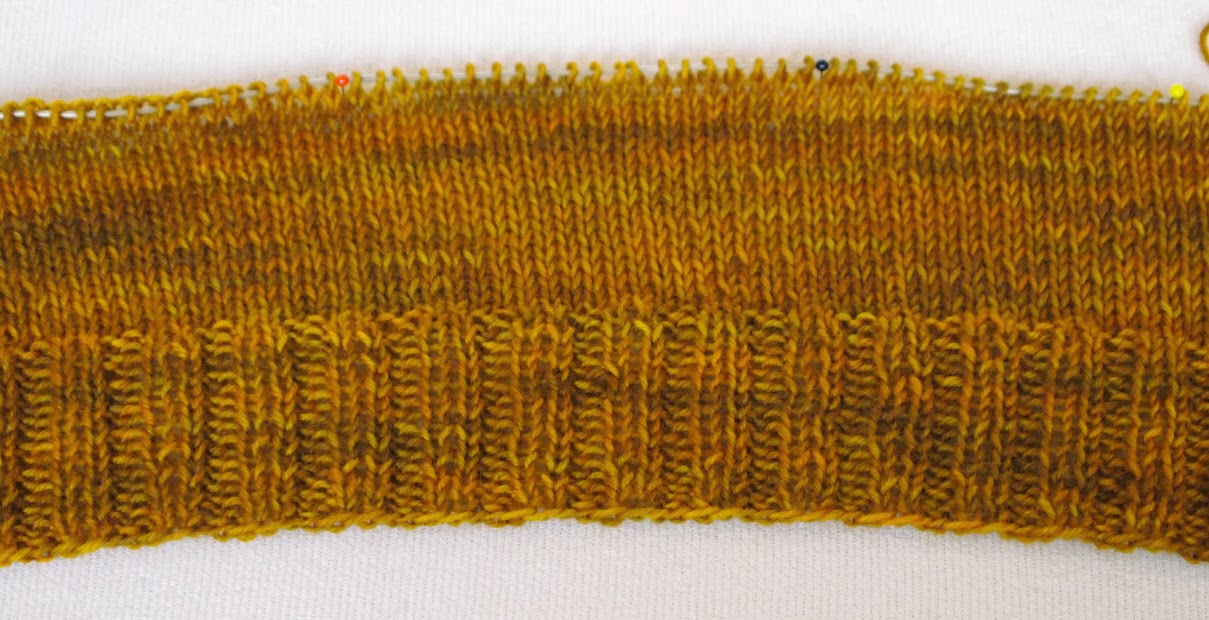 In conclusion: the dyeing method works fine, but I need to fine tune the process. I need to do further research on why the soaking in hair conditioner solution led to bleeding and is it yarn-specific or does it depend on the conditioner type and brand. Although the dye instructions explicitly do not require mordant, next time I might try mordanting the yarn in advance. I need to do better sampling of the dyes and, of course, to plan in advance and bridle my impatience.
Posted by Carmela Biscuit at 8:08 PM